I think I’m going to stay home today. Which I haven’t done in at least a month or more. I do kind of want to go to Stephanie’s afghan-along-sew-up-party, but I should really hit the books. A least a little. 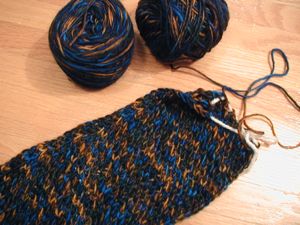 I’m now done the first ball, and since I do have that second one wound up I think I’ll make it a little longer (although it’s already fairly long, at least 4 and a half feet. It’s purdy. Here’s a blurry closeup: 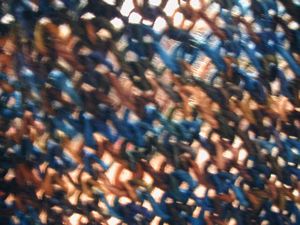 And here’s the beginning of the cabled scarf, which I’ve decided is going to be for my grandfather. It’s nice and soft. 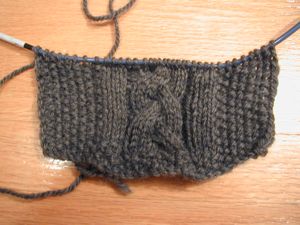 I’ve also gotten one kersti handwarmer completely finished (except for the ends) and for the other one I just need to do the thumb. So those will be done today. Motoring along the Christmas gift list, I believe that I’ll whip up some wristwarmers for my teenage male cousin next. I’m going to use black and red cotton-ease, and maybe do one with a star and one with vertical stripes. I’m also still flip-flopping on what I should make another female cousin, a year older than me – I can’t decide between a feather and fan scarf (out of burgandy TLC Cotton Plus), hand/wrist warmers, or a yarn gift since she knits a bit.

I’ve come up with a project to use up the random leftovers and stash yarn that I have – a knit-lengthwise skinny scarf or shawl. But that won’t be for a while.