Seriously, when I turned on the TV yesterday and CSI wasn’t on, I was upset.

First up, a shot of my newly organized yarn/knitting bookshelf. 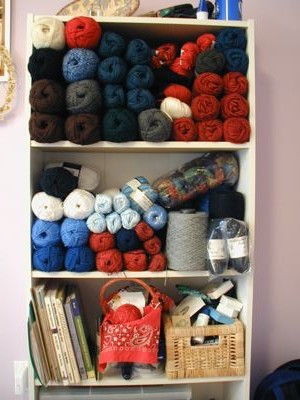 Now, this picture in no way displays all of the yarn that I have. And see the top of a bin at the bottom of the picture? There are more of those, and they’re filled with yarn and tools (like my old straight needles). There’s also a tupperware tub and my workbaskets. But hey, this is a pretty yarn to show the nice yarns I’ve got! See there’s a bag on the second shelf there? That’s five balls of Kureyon that I bought at the KW show to make this bag: 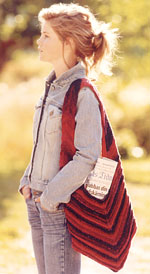 I’m excited about it – there was a sample knit up at the show that convinced me to get the kit. Overall the show was fun, there was lots of see and buy, but I didn’t fall off the wagon – that Noro was all I bought. I think I was rather overwhelmed by it all. I did get lots of great comments on my Mango Moon silk poncho, though! It was awesome to take SnB on the road.

A progress shot of my turtleneck shrug: 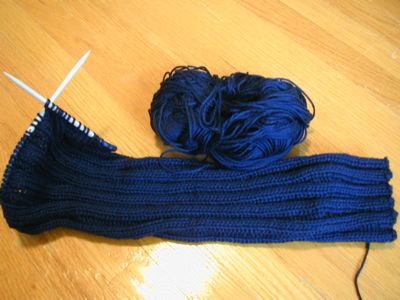 Motorin’ along. I want to get this sleeve done soon, like in the next couple of days. But it might take longer than that due to this: And these are only the books for this term – next term I’ll have to buy another two at least (most likely three because I’m going to try and pick up another half course). Argh.

Off to prepare for my lab tomorrow – then knit for the rest of the night.