it’s all in the finishing

Lots to blog about today!

The silk garden cardi is done! It’s soft and beautiful, and I think it’ll be great to wear over t-shirts or tanks when it gets a little warmer. 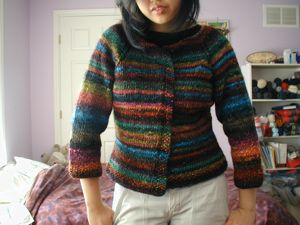 It’s a little big though – just when it’s open. So I figure I’ll add buttons. I didn’t knit in buttonholes, but the stitches are loose enough that I think I can just “make” them. So which ones?

Here’s a couple detail shots – yos for the increases, and the whole thing was fairly loosely knit.

What would a completed sweater be without the Rachael? 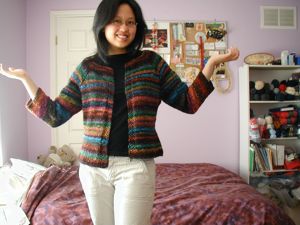 One more thing, somewhat unrelatedly.
(I’m in the mood for finishing – I think I could burn through sewing on buttons, putting in zippers, waistband and hook-and-eye tape on almost-but-not-quite-finished-objects, but I’ve got a ton of schoolwork to do! Hopefully that motivation will still be there on the weekend…)

I’m going to put three of these 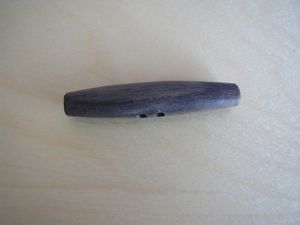 on my Tartan Jacket. What do I use for the loops? Crochet chains? Faux suede laces (that I’d have to buy)? Something else?