Silly me, I finished both of those hats for my grandmother but didn’t take any photos of them! I think she liked them, though – and she admitted that she lost the last hat I made her (probably 5+ years ago). 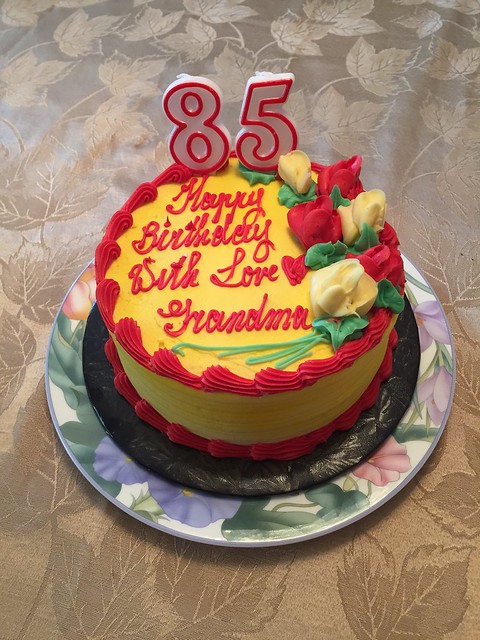 I got new business cards! It’s been ages since I ordered some. I think they would be nice if they were shiny, but I decided on recycled paper instead. Pretty minimal. 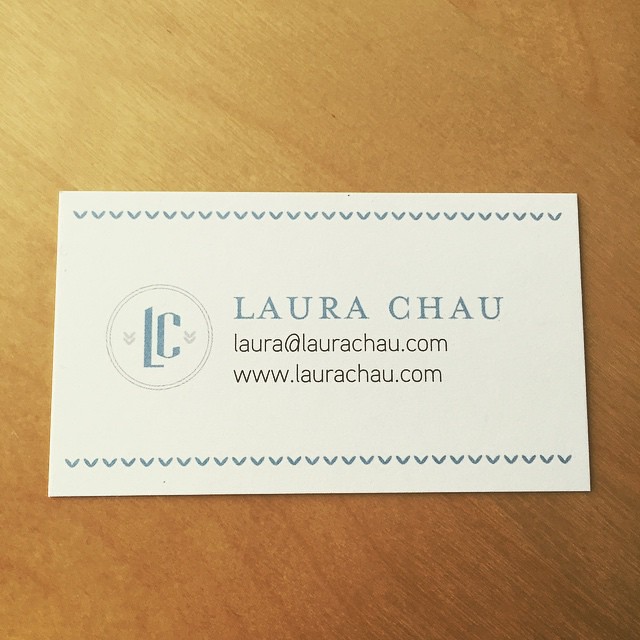 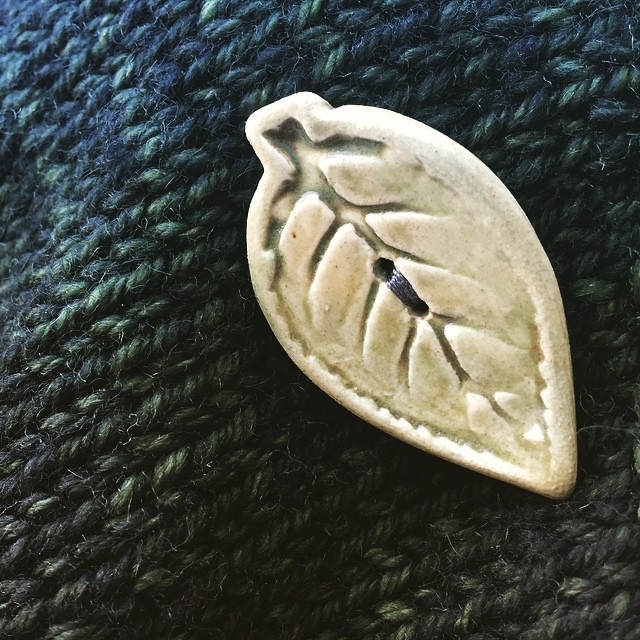 The sweater I’ve been knitting has had a few bumps though. It was all going along swimmingly, then I realized partway into the yoke that my math was totally wrong. Sigh! 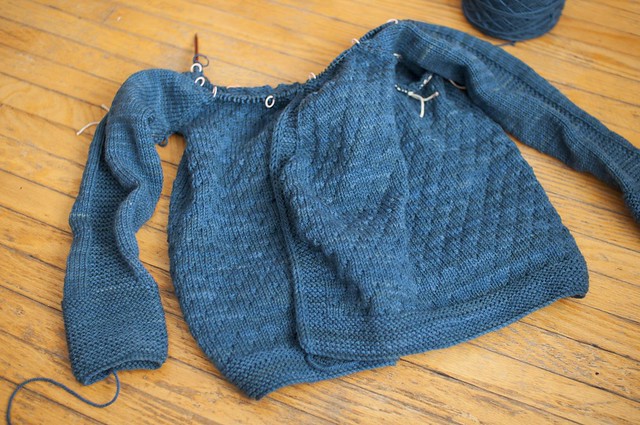 I had to rip pretty far back! Partway through the yoke for the second time I had to rip again, but not as far. Don’t become a designer if you aren’t willing to rip stuff out repeatedly. 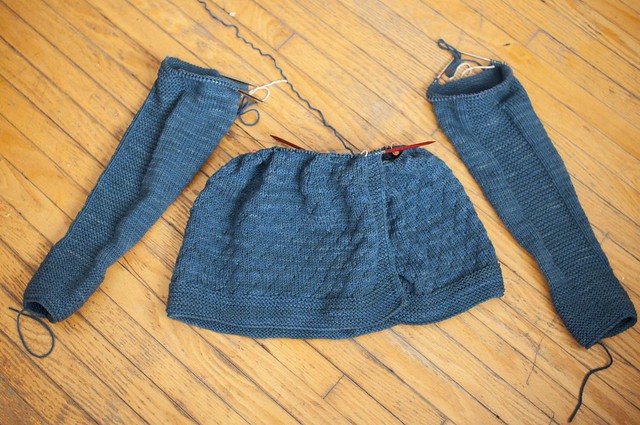 But I actually finished the sweater last night and wove in the ends this morning! I’m really excited to wear this one. Pattern is my own, and will be released next month (I hope). I also took a bunch of photos while I was grafting the underarms, so I’ll have a tutorial soon on how to close up those pesky underarm gaps in a raglan!

Reading:
The Shell Collector by Hugh Howey. Interesting premise, fun quick read, but a little unsatisfying in the end.
I also just finished Sapphique by Catherine Fisher, which is the sequel to Incarceron. Again, an enjoyable read but not super amazing.

There’s a lot to love about knitting hats – they’re (usually) quick and take only a bit of yarn, you can learn a lot while making them, and they’re useful! If you’re new to knitting hats, Karen from Fringe Association has a great all-about-hats thing going on right now!

I shared this photo on Instagram, of a hat I’m knitting for my grandmother: 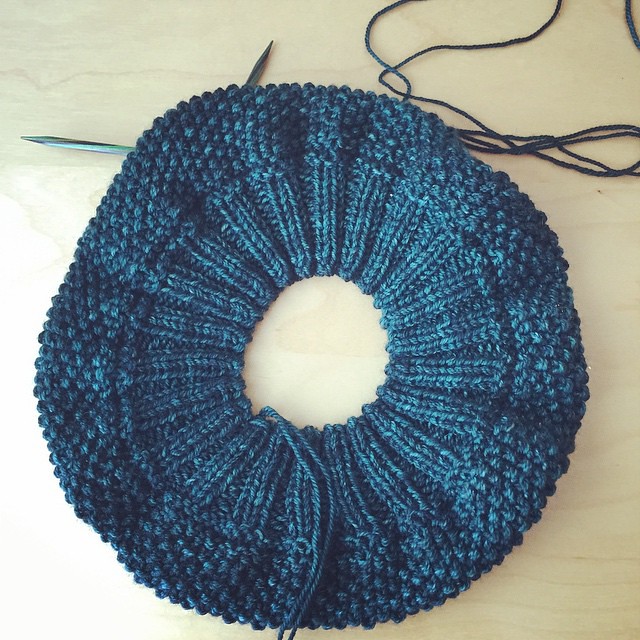 Looks pretty good – it’s a beret, with ribbed brim. But I was starting the decreases and realized that it was too big – if it’s too big for my enormous hair, it’ll be too big for my grandma! So I ripped and started again. Then it was too small! Argh!

Here’s hoping the third time’s a charm. This one is a better representation of the colour – it’s Handmaiden Casbah in Tourmaline, held double, on 4.5mm needles. 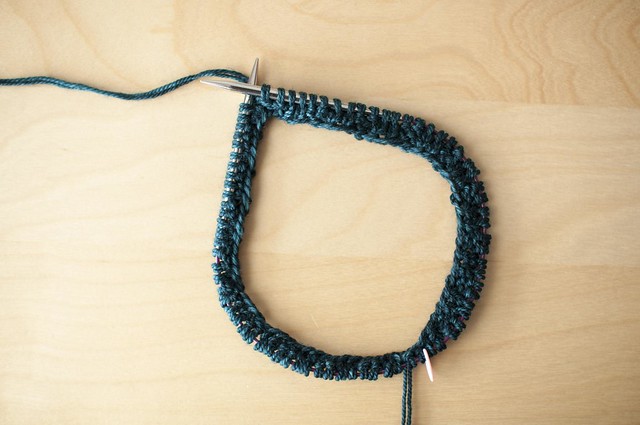 Just in case, I also started a second hat in a different style in case it’s more appealing to her – this one is Amy Swenson’s Better Bucket. Also in Casbah, double stranded! 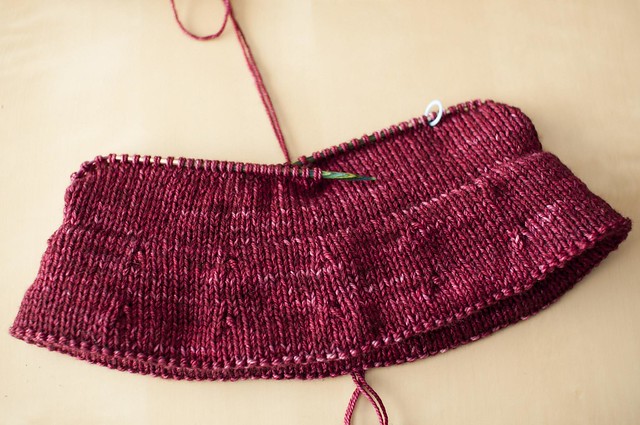 Time to watch some Downton Abbey and get these done!

Awhile ago my friend Jess lamented on Twitter that she had all these lovely fabrics from her travels in India but no time to sew it up, what with two little ones! So I volunteered to take the fabric and turn it into a quilt for her (with the understanding that it might take a long time…).

There are quite a few different fabrics and different weights – some are pretty thin – so I decided to just do a simple patchwork top with strip piecing. I cut strips 6.5″ (the width of the quilting ruler) x width of fabric, mixed them all up and went for it.

This Postage Stamp tutorial from Red Pepper Quilts was great – I’ve always been a bit willy-nilly with my seam allowances but this time I was determined to do it Properly. 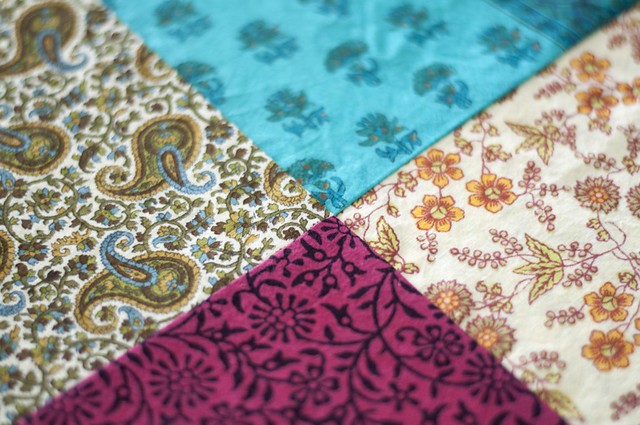 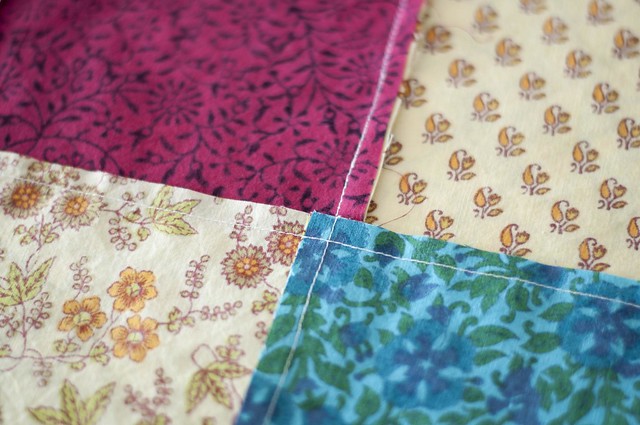 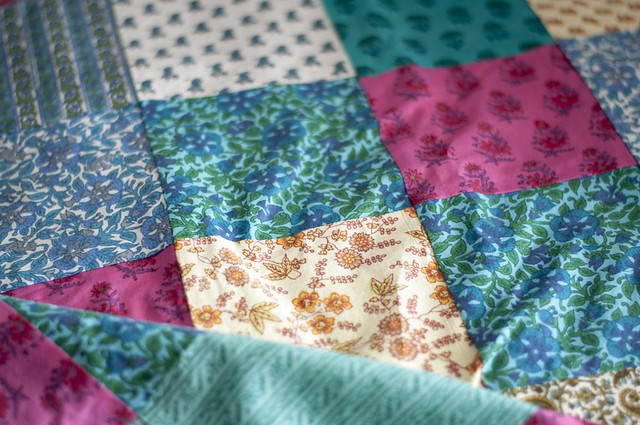 I sewed up a storm this weekend and finished the top, which is quite huge, for a queen sized bed. Next up I need to figure out what to do for the back – I’m thinking stripes rather than blocks.

Reading: Acceptance by Jeff VanderMeer. It’s the third book in a trilogy and I’m really enjoying it! Fast and very mysterious.