What do you think, can yarn be sexy? I think so. 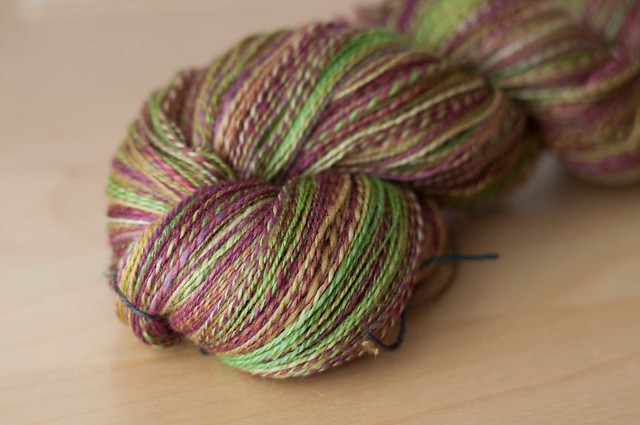 This one’s more fun than sexy, but I made this little magic ball awhile back and decided to swatch with it. It’s quite short lengths of Koigu (probably 12-24″), Russian joined together to make a scrappy ball. (What’s a Russian join, you ask?) 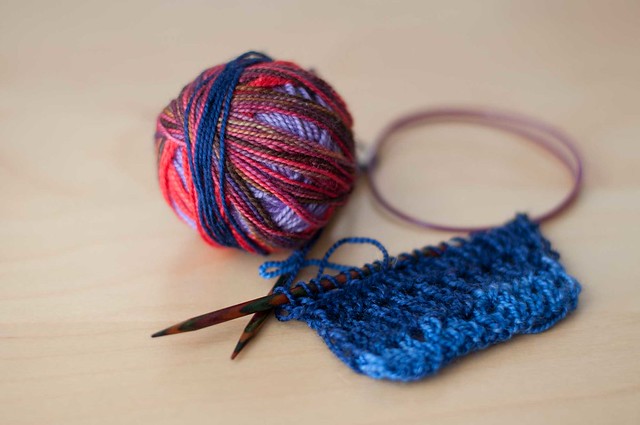 I swatched with some gorgeously bouncy, round Targhee from Dirty Water Dyeworks, Johanna in colour Pond. Swoon. Itching to cast on for this sweater! 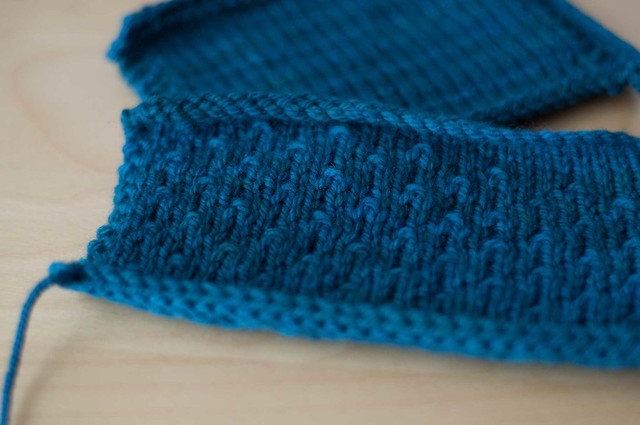 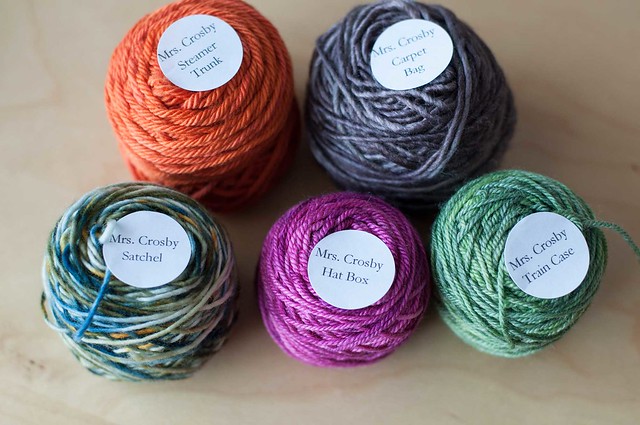 Sexiest of all? Handmaiden 4ply cashmere. Started a new cowl project that I’m quite excited about – it looks like double crochet but it’s actually knit! 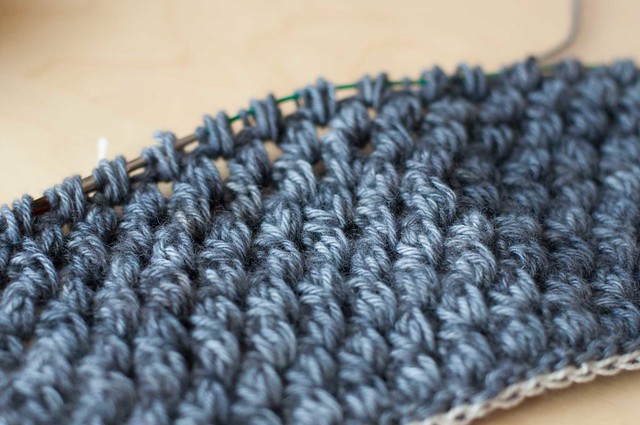 Have a wonderful weekend!

P.S. The Indie Gift-A-Long sale ends tonight at midnight! If you’ve been eyeing any of the patterns in my gift-a-long bundle, now’s the time to get 25% off with code “giftalong2014”! Make sure you join the Indie Gift-A-Long group with whatever you’re making this holiday season – there are SO MANY PRIZES!

The new Brooklyn Tweed Wool People 8 is here, and I have a pattern in it! I hmm-ed and haww-ed over submitting to the design call, but I’m super glad I did. This was a pretty challenging design to get out of my head and onto the needles, but I’m pretty proud of the finished sweater!

Bracondale is a super cozy, turtleneck tunic with a twist on traditional cables. I worked the front and back pieces on the bias, with braided cables and ribs along with incorporated I-cord along the hem edge. The ribbed side panels help to create a modified opening for the drop sleeve.

The turtleneck and sleeves are picked up and worked after seaming the body. The deep dark purple Shelter (Plume) is really beautiful – and I love, love, love the mustard pants they styled Bracondale with!

Buy on Brooklyn Tweed
Queue and fave on Ravelry!

What’s your favourite from the collection? I love Bristol Ivy’s Keel, but that’s no surprise as she is a genius!

Today I have the honour of interviewing Gift-A-Long designer Elizabeth Green Musselman of Dark Matter Knits! Elizabeth does tons of awesome stuff in the knitting industry, including designing for men and boys, running a podcast, graphic design, copy editing and layout.

Check out Elizabeth’s designs on Ravelry, including her Gift-A-Long Sale bundle!

How did you get started in designing?

I learned to knit in the mid-1980s, but only picked it up in earnest in the mid-1990s, when knitting was going through a renaissance, thanks in no small part to the internet. It was amazing to me to see designers appear on the scene who were making beautiful things but who had been knitting for far less time than I had. It made me think: why shouldn’t I give this a try? It took me a while longer to actually start designing, but the seeds got planted early, thanks to some real trail blazers like Debbie Stoller and Ysolda Teague.

Perversity, probably. Hahaha. Actually, I’m only half kidding. I’ve never liked doing what everyone else is doing.

Also, I live in a world of men with unconventional tastes: men like my husband who love bright colors and lots of texture; boys like my son who grow their hair out really long—no matter how much they’re teased for it—and want hats that can accommodate ponytails; men like my dad who love hunting and fishing but also deeply and truly appreciate hand-crafted things; friends who are gay, friends who are now men and used to be women, and all sorts of fascinating people who don’t conform to conventional ideas about masculinity—all of those men deserve great hand-knitted garments.

I love designing for that group, but it’s also really challenging, because most knitters are women, and most people like knitting for themselves, and not all men like wearing knits … and and and … In the end, I don’t end up having big whammo pattern release days. (Though my men’s and boys’ patterns do tend to have a veeeeery long shelf life.) Another challenge is that even men with wilder tastes tend to be more conventional than fashionable women. So I try to design pieces that look pretty classic but that have knitterly details in them to keep the making of them fun.

What goes into producing a video podcast?

Oh my, so much. I think quite a bit about what I want to say and show in each episode—I percolate on it a lot over the two weeks between each ‘cast. The recording usually goes pretty quickly. It’s the post-production stuff that kills me each time. I’m still trying to figure out a foolproof way to export, edit, compress, and upload the video each time without having something go wrong. It can be intensely frustrating, though as soon as people’s comments about the episode start coming in, I remember why I do it.

What do you do in your downtime?

Being a freelancer and a parent, I don’t have a ton of truly free time all to myself, but I do enjoy running … which still makes me laugh to say, because that is not something I EVER thought I’d enjoy doing. But after groaning under the weight of depression and literally being overweight for years, it is so liberating to be able to run and run and run.

I also spend every Sunday afternoon at our local gaming store with my son playing a role-playing game called Legend of the Five Rings. The game is based on samurai culture. My son plays a brash archer and I’m a courtier who’s essentially the medieval Japanese equivalent of Sherlock Holmes. We both enjoy it so much.

Do you find graphic design and editing in the knitting industry takes time away from designing?

Absolutely. And I have had to make a really deliberate effort in recent months to carve out more time for my own knitting design. I think lately I’ve found a balance I like more, and you’ll be seeing more frequent patterns from me in the near future.

That said, I really do enjoy doing graphic design and editing for other knitting designers, because those are arts in and of themselves. I see all these people around me with gorgeous ideas, and I love helping them burnish their words to a high sheen, organize their thoughts into a gripping narrative, and display their instructions on a page in such a way that conveys both beauty and clarity at the same time. It’s immensely satisfying to me to have a whole pattern match the gorgeousness of their idea and their garment and their photography.

What are you knitting this holiday season? Do you knit gifts for others?

I’m never very good at planning holiday gifts, but I always end up making some. I just designed some hunting gloves (pattern coming soon), and the photography sample is going to go to my dad. I’m thinking I want to do a handmade Christmas this year, actually, so I’m sure I’ll knit more stuff and then sew and cook and craft all kinds of other things. I give a lot of my knitting away, really.

How was writing Kung Fu Knits different from self-publishing? Any tips for designers who want to get into writing a longer format like a book?

Man, you ask good questions. Kung Fu Knits was kind of an unusual case because I was the sole book designer and main copy editor for Cooperative Press at the time (I’ve since scaled back to a freelance designer for them), and I decided to do my own photography so that we could pool resources into hiring an illustrator to do the comic book portion of the book. So, in the end, I did a lot of what a designer would do if she were self-publishing. I’m enough of a control freak that that was perfectly fine with me.

Because I’ve managed the book production end of so many books for Cooperative Press, there are several pieces of advice I would give to people planning their first book. First, think about what the market is now. It’s not a pattern-book-buying market anymore. If you really want your book to sell, I’d strongly advise that it have a lot of technique instruction or a great story built into it. Just patterns isn’t going to get you very far anymore. Second, realize that creating a book is a hugely time-consuming endeavor that isn’t really going to earn you a ton of cash. It just isn’t. It’s going to take you at least a year to put the book together (not full time, but you’ll work on it for a year or more), and you’ve got to want the book for reasons other than big royalties. Publishing a book can establish some professional credibility and give you a format that might be the ideal format for what you want to accomplish, but make sure those reasons are enough for you. And finally, be open to creative input from the other people who will be involved in your book project. You’re the author, but there will be a photographer, a tech editor, a book designer, and possibly others (copy editors, stylists, etc.) who will have really smart ideas about how to revise and organize your ideas. Listen to them. They are artists, too.

Pick one of your own designs that you think makes the perfect gift and tell us why you think that.

I just published the 30-Round Rasta Hat, which makes perfect gift knitting because it literally takes only 30 rounds to knit. But the leaf lace pattern gives the hat a truly finished quality that doesn’t say “I knit this up last-minute!”

Oatmeal raisin. There’s something about a warm raisin that I cannot resist (cf: carrot cake).

Elizabeth Green Musselman is the author of Kung Fu Knits (illustrated by Ben Bender), published by Cooperative Press.Check out Elizabeth’s designs on Ravelry!

The Gift-A-Long runs until Friday, November 21! Join the Ravelry group and see what patterns I have on sale!