I apologize if you’re not a plant person! There’s a little knitting at the bottom of the post.

Last weekend we ventured out on a gorgeous day to do some shopping (City of Craft) and eating – here’s the soft serve we had after lunch at Momofuku Milk Bar – one cereal milk, one fried apple pie, both with cornflake crunch. Man that apple pie one was really delicious. 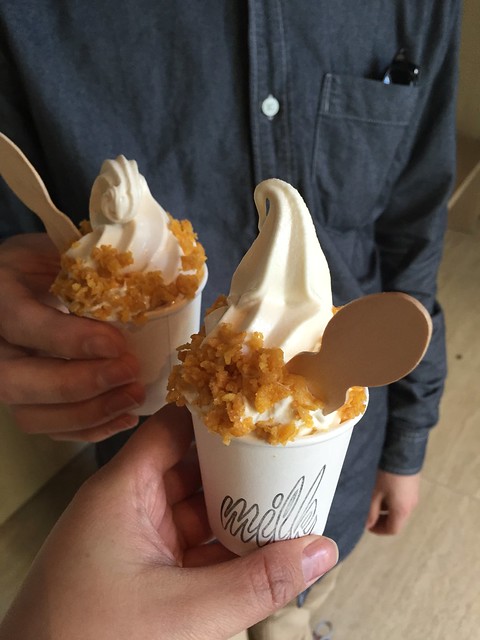 Crown Flora was having a plant sale and Dale’s been wanting some new cacti or houseplants so we checked it out. There was a line-up to get in still, but it wasn’t nearly as long as it had been before the shop opened, so I heard. 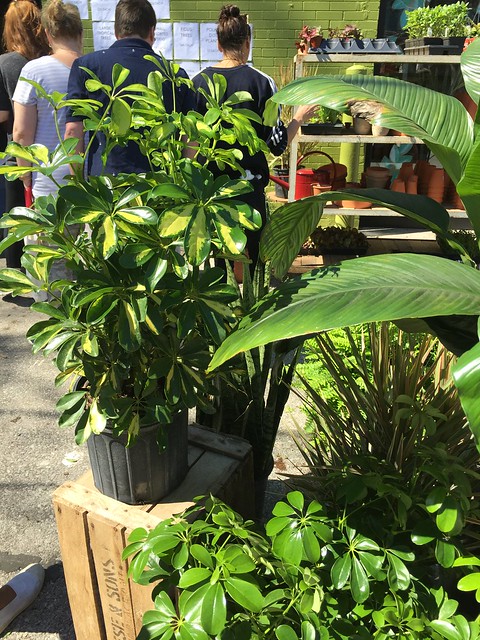 Things were getting a little picked over, but we still managed to find some gems. It was one of those small spots where the line to pay snakes around the store, so once you join the line you can still check out all the plants on your way to the cash! Ha! 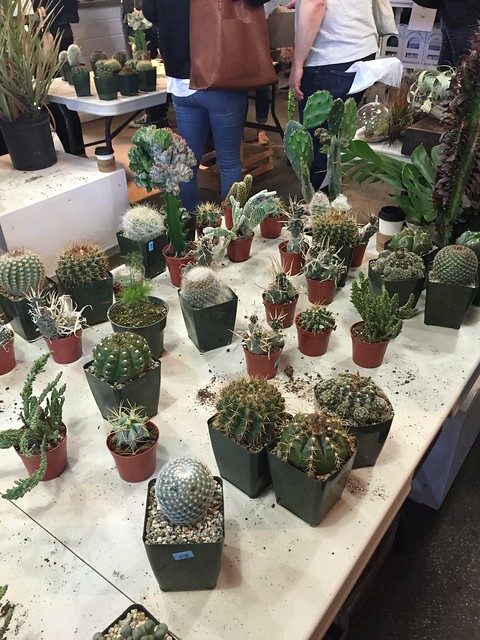 It was quite windy, and I saw a few people struggling to protect their new plants while walking around. I’m super glad I took my basket as it made it very easy to carry them on the rest of our outing (with a box in the bottom for stability). Still managed to get poked by those cacti a few times though. 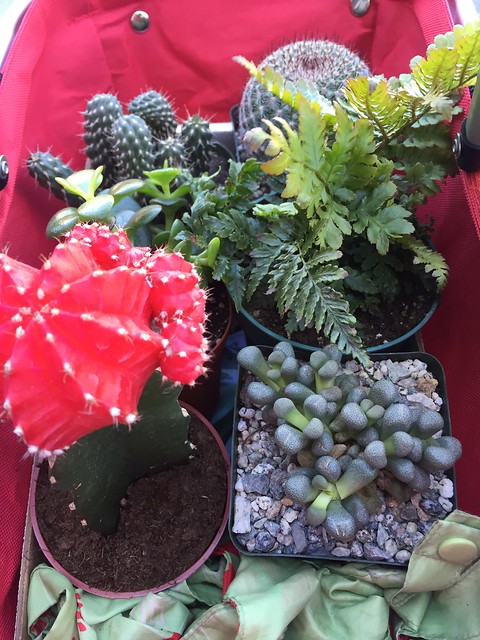 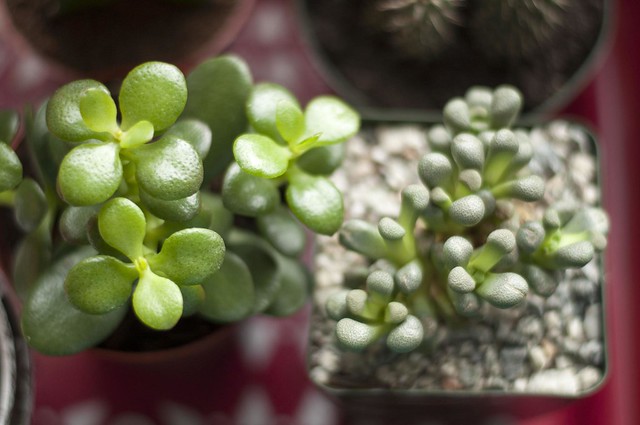 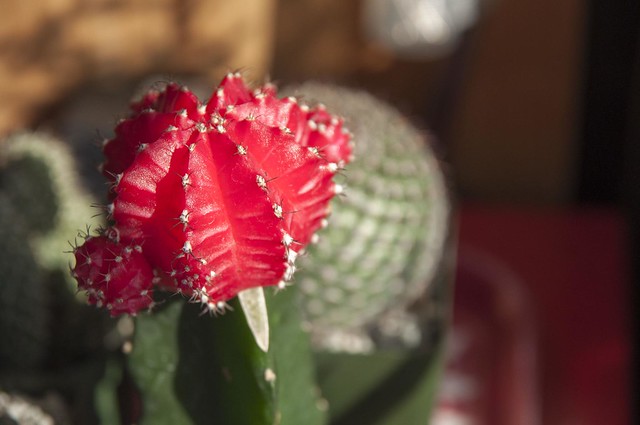 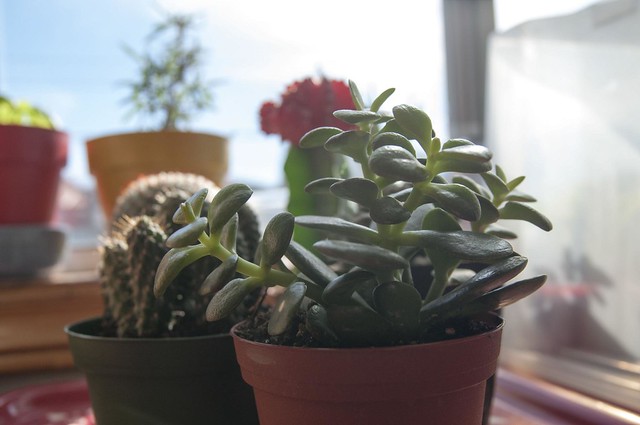 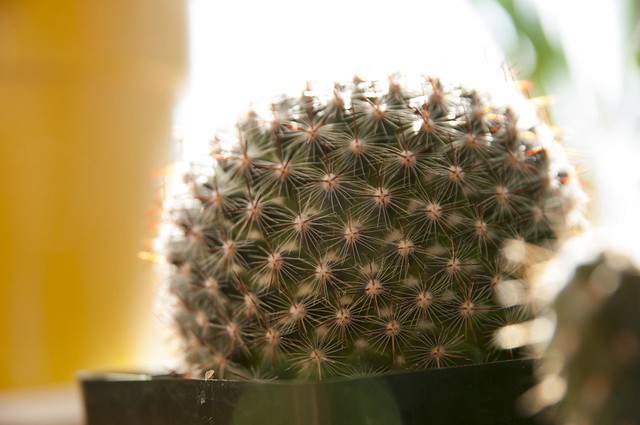 In the garden, the radishes popped right up and need thinning. The peas are just starting to come up – there was a bit of snow yesterday and today, hopefully they’re okay. 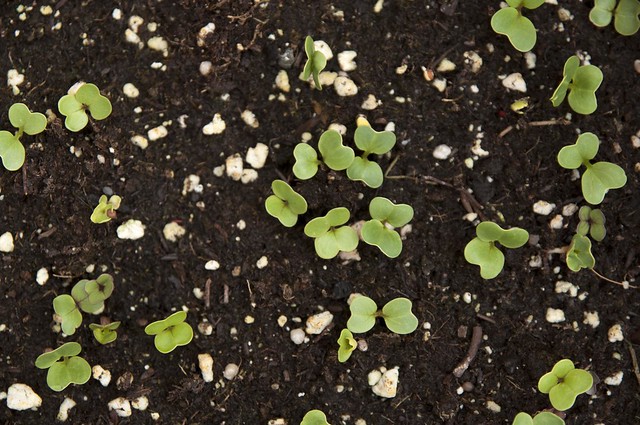 And since it’s been so gloomy, I set up my desk lamp to be a grow light for the tomatoes (with a daylight bulb). They’re looking good and I think they’ll appreciate the extra light. 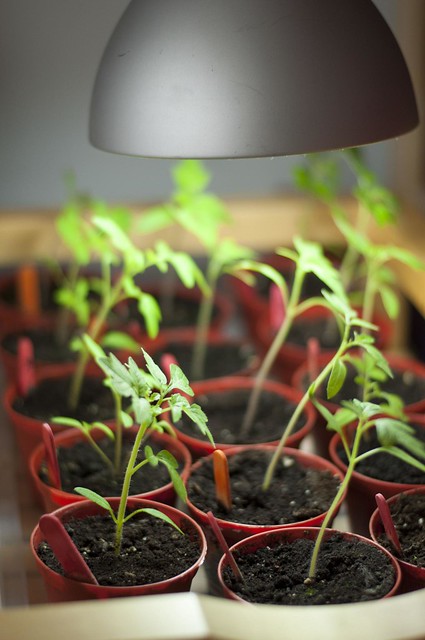 A little bit of knitting, since I don’t have much I can share – I started this sweater out of Indochine silk from Lantern Moon, but I was a bit unsure about the amount of yarn I have, and it got ripped out. 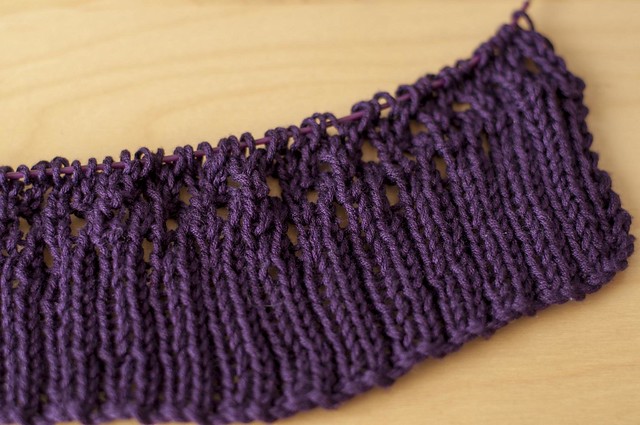 But the good news is, the yarn is much happier being knit up into a cowl. 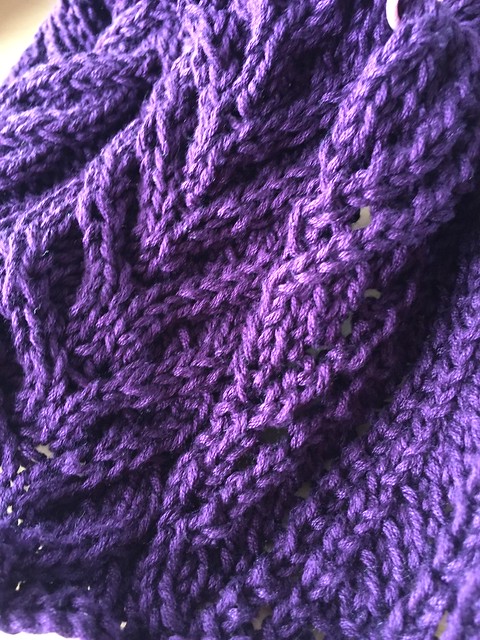 A bunch! A whole bunch of holds on e-books came in from the library all at once, isn’t that always how it is?

Bios, The Chronoliths, and Blind Lake by Robert Charles Wilson: good straight-up scifi. I like this author a lot.
The Wind-Up Bird Chronicle by Haruki Marukami: long and definitely winding. Like when I read 1Q84, I had to concentrate a bit to keep the thread as I’m reading. Lots of weirdness. I liked it but it was kind of hard to keep going sometimes.
Ancillary Justice (Imperial Radch #1) by Ann Leckie: Interesting premise, I’m definitely going to read the other books.
Edge of Dark by Brenda Cooper (The Glittering Edge #1): Another good scifi world from a woman author! I really enjoyed this one.
The Martian by Andy Weir: Read this one really fast as I only had a few days left on the book! It really does read like a movie – the film is supposed to come out in November. Really draws you in, and amidst the science there’s humour too. Loved it!

The very first tiny leaves of chard from the windowsill; Oatmeal Date sandwich cookies (I made them smaller, and cooked the dates just with water and some sugar); shepherd’s pie. It’s still cold after all.

It’s been all secret knitting around here lately, which isn’t very good for blogging! But now that the weather has turned (maybe?) and it’s a bit brighter and warmer, it was time to get some garden stuff going.

I picked up a bunch of tiny pots at the dollar store to start my seedlings this year – I’m a bit tired of peat pellets, and I can reuse these ones next year! Plus, the plants will have a little more room and maybe I won’t have to repot them again before transplanting. 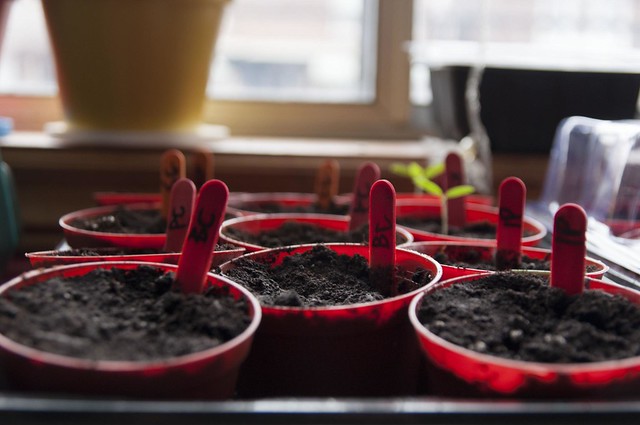 I’m starting extra tomato plants this year even though we won’t have room for all of them on the deck. Some local friends will get lucky with free plants! 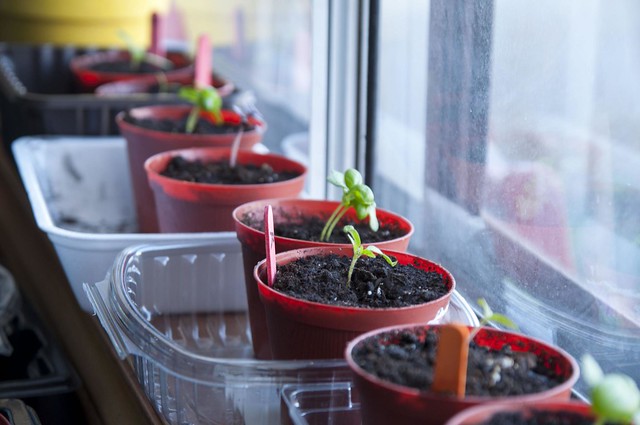 The basil is doing nicely from seed. I’m planning to do aggressive pruning on the plants to see if I can get them to grow bushier. Varieties: Italian large leaf and dark opal basil from Cubits. 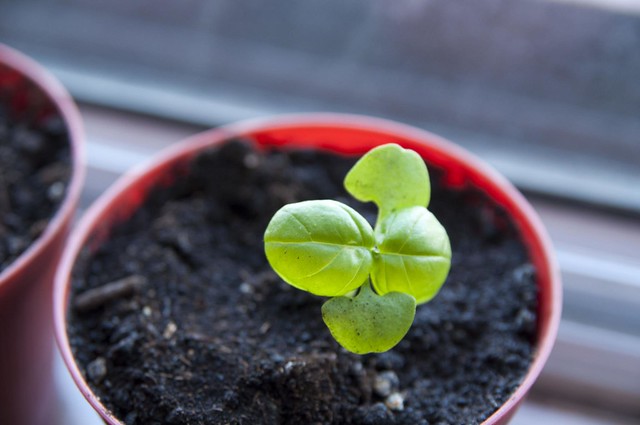 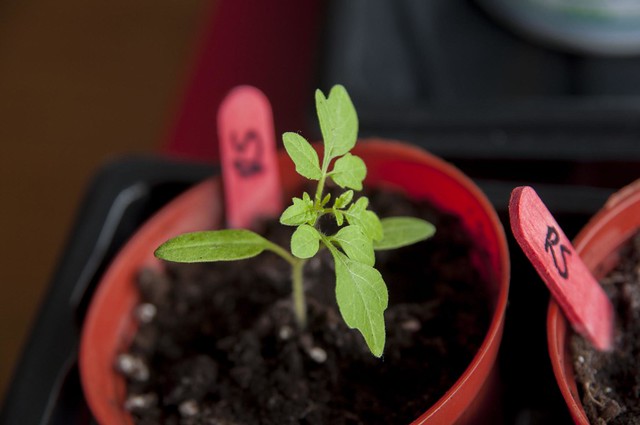 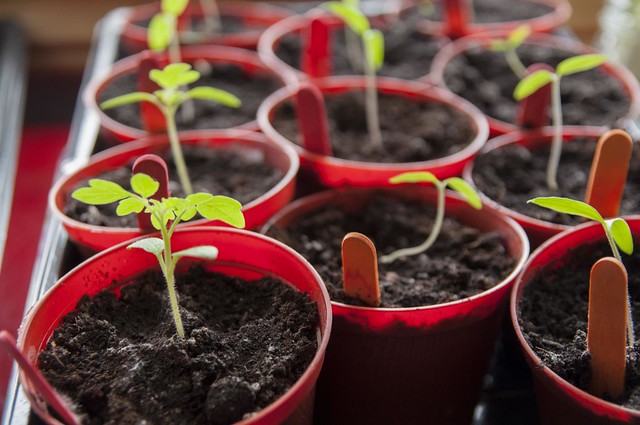 Unfortunately even with my nifty popsicle-stick labelling system I’m pretty sure I’ve mislabeled at least one tomato! 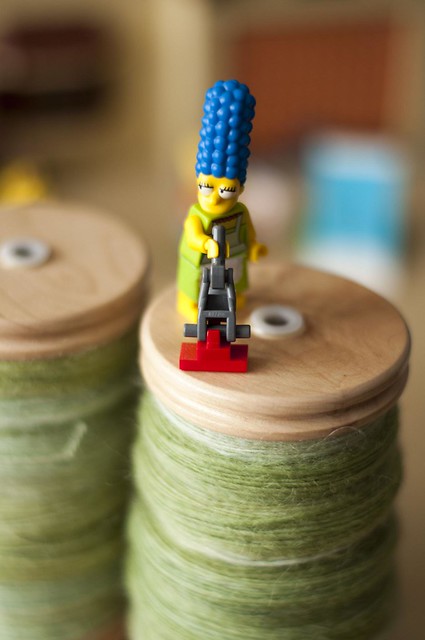 I haven’t spun much in ages but there’s been lots popping up in my Instagram, and it’s inspiring! I wanted to take a little time off knitting this past weekend so I pulled out a few braids. Marge is unimpressed. (Yes, we have the Lego Simpsons House.) 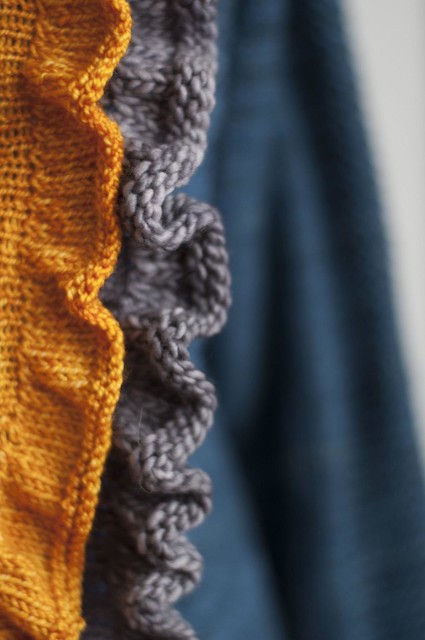 Hopefully I’ll have some new patterns to share with you soon!